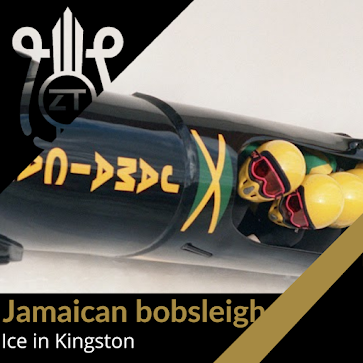 In the cinemas of the United States during the autumn of 1993, the film “Cool Runnings” climbed all the ratings and was often sold out of tickets.

It certainly wasn’t like a modern-day Marvel’s film or even a high-budget colossal, but the genuineness of the story made it a viral phenomenon.

This film told the true story of one of the most incredible sports events ever seen: Jamaica’s first participation in the Winter Olympics, with a bobsleigh team! Yes, you read that right. Jamaican bobsleigh team. The participation of this team was shocking to the people of that time. A tropical island that shows up at the Winter Olympics: the film could only be a huge success.

We recommend everyone to see this movie at least once, but now we would like to tell you about the true story of this incredible sports adventure.

The team’s appearance on the ice tracks of the 1988 Winter Olympics, Calgary, Alberta, is still one of the iconic moments of the Olympics. It made sense if they were treated like underdogs in that competition because they were the candidates from a country with a warm climate representing their nation in the cold-weather sport. This sentence is itself an ironic statement, so you can imagine the spotlight and popularity they gained when they entered for the first time.

The first person to bring light to Jamaicans that they should compete in the Winter Olympics was George B. Fitch. He was the Commercial Attache for the American embassy in Kingston. He said that Jamaica had great athletes, and they should be able to play any sport. The idea of bobsled was given by Fitch and his friend William Maloney, a businessman. They saw locals pushing pushcarts thereby.

These local cart races had many similarities with bobsleigh races, so they advised the sports authority to assemble a team for it. The trials to hire athletes began after the then president of the Jamaica Olympic Association gave his consent. It was going to form the basis of the first bobsleigh team in the country. Since the start is a crucial part of the race and Jamaica has so many sprinters, Finch and Maloney thought they could recruit some of the athletes from the Summer Olympics, but they weren’t really crazy about the idea. The recruitment of project participants is then open to the public. It begins with a series of advertisements in newspapers and posters posted on the streets of Kingston, which however turn out to be a hole in the water. So left with no other option, they asked the Jamaica Defence Force to provide volunteers for the team. The first squad of this game in the country was of four members in the year 1987. Devon Harris, lieutenant in the Jamaican army; Dudley Stokes, captain of the Jamaican Air Force; Michael White, National Reserve Soldier; and Samuel Clayton, Railroad Engineer. These were the debut members of the team. Caswell Allen later replaced Clayton ahead of the 1988 Olympics.
They had to ask for the essential equipment to compete and it was quite understandable if we consider their situation, they had no experience in this sport.
The funds for the training were provided by Fitch and the Jamaica Tourist Board.
The first workouts are done with the means at hand, that is, with little. The four athletes whiz down the streets of Kingston in a not very stable soapbox. The same car is used by the children of the capital, who enjoy being frightened by slalom between vehicles and pedestrians.
Over the weeks, the sessions become more serious.

The fundamental training was conducted in Canada and Austria. There the team prepared for the 1988 Winter Olympics. The coaches were recruited from the US, and the recruited trainer for the team was Sepp Haidacher. The International Bobsleigh and Skeleton Federation reached an agreement with the local authorities to allow the entrance of the team in both four-man and two-man events at the tournament.
Once a person decides to go against the grain, there is always a group of people who have an evil eye for them and try to get them into the flow. The same thing happened when the Jamaican troupe started appearing on North American Media. They were described as a comic story, but soon their participation in the Olympics became a viral fairy tale that found the support of the people. It was an Olympic fable that taught how sport unites people beyond barriers and appearances, the fable of 4 Caribbean boys, who have almost never seen snow, who would compete in a winter discipline.
The spotlight they received was overwhelming to the point that they were unable to leave the Olympic village for their safety; They looked like rock stars.
A detail that makes this story even more incredible is that linked to the participation of Chris Stokes. His name should never have been in history. He owes his participation in the Calgary Olympics to an incredible combination of circumstances. He was as a spectator that he decided to go to Canada, to encourage his brother Dudley. But eyes will quickly turn to him. Caswell Allen, a team member, was injured while practising on a frozen lake in Calgary five days before the four-man event. That left the team only with three members, and Chris became a member of the team.

Dudley Stokes and Michael White were the first to take to the Calgary track competing in the two-man bobsleigh event, making this event the first one where Jamaicans took part in winter sports.
In their first run, they ended up in 34th place. They were ahead of the second New Zealand team, Mexico, the US virgin island and the two Portugal’s teams. On the second run, they performed better and reached up to 22nd position. In their third run, they gained 31st place while in their third run. They finished their final fourth run at a place above that of their third run, 30th. 30th out of thirty-eight teams at their absolute debut. Not bad!
But it was their four-man event the entered the hearts of the fans. At the same time, the USA ice hockey team was eliminated, which caused the slot in American time to empty. In need to fill the air time, they began to telecast the four-man event of the Jamaican, so there were millions of people watching these guys.
Their first run didn’t end well. The push bar of the sleigh was broken as Dudley Stokes settled into the bob, leading them to come in 21st place out of the 24 teams competing.
On their second attempt, the squad was positioned second last. It was because White struggled to crouch down his seat correctly. He was almost upright on the first turn of the track.
The event of the third run is the most memorable part. Stokes injured his shoulder before the race but decided to continue competing. They got a good fast start that run. The team made the seventh most rapid start among all participants. But at the ‘Kreisel’ turn, Stokes lost his control over the bobsleigh. The sleigh came in contact with the wall of the track and flipped the four athletes.

The members pushed themselves out of the damaged sleigh, forced the sleigh to move out of the track, and then carried it. At that precise moment, each spectator was emotionally pushing the bob with them. They were listed as not finishing the race as the team didn’t complete its run. The bob was too damaged, and they didn't participate in the fourth and last round of the event.

After their first time, the  Jamaican team participated in six Olympic games in a bobsled event.

Presently the Jamaican bobsleigh team prepares for both, men and women category. But they lack funding. Tod Hay, the former coach of Dutch and US bobsleigh teams and the former Olympic winner in the 2014 Winter Olympics, was appointed as the technical director and the head coach of the Jamaican team. However, the funds raised were not enough to fulfil his salary, so he had to quit after playing with the team only for one season. But a mentor always looks out for his or her disciples; Hay did the same. Though the funds were a problem to be with the team officially for him, he remained connected to the team and worked with them in a capacity, unofficially. The Jamaican Women’s Bobsleigh team was formed around the year 2018. Dudley Stokes was appointed as the one responsible for the general logistics, mental health of the players, and performance coach.

About Pyeongchang 2018 Winter Olympics, the men’s team was left behind the qualifications by only one position in the world rankings. The Jamaican women’s team ended up at 19th position in their debut Olympics.

So the tale of the snowless bobsledders still continues, and from 2018 onwards, it will also have pink shades.