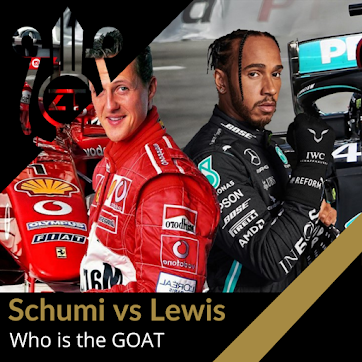 Lewis Hamilton set a new record at the 2020 Formula 1 season after breaking some of Michael Schumacher’s long-standing records. The Briton has won every F1 championship since 2013, and he might be on the path to greatness.

But the big question is; who is the G.O.A.T (greatest of all time) between MICHAEL SCHUMACHER and LEWIS HAMILTON?

Both drivers are skill full and have dominated the F1 tracks during their respective periods. So, picking Hamilton over Schumacher and vice versa would be mendacious.

However, to try and determine who the most dominant driver was, consider the margin each driver achieved in various poles and compare their teammate performance. That way, you can decide if it is their driving capability or the car they are driving that is most dominant.

Can you compare Lewis Hamilton and Michael Schumacher?

Inevitably, it is hard to decide between the two who the best driver is. Both F1 drivers have raced against cars ahead of them on the tracks, and they outdid every opponent. But today, numbers alone are not sufficient to establish the best outright.