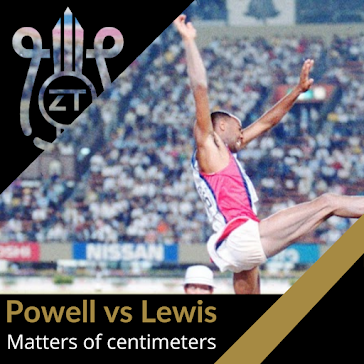 Mike Powell raised his right arm and imitated playing the piano, remembering his music lessons from when he was a child, dialling on some concertation. Focus was vital. Round one…..The rivalry between the American born athletes Mike Powell and Carl Lewis is an example of one of the greatest competitions ever in any sport. Rivalries make sport what it is. Undoubtedly, the 1991 World Championships are best remembered for the long jump final between the two. Lewis at that point had not lost in a decade, conquering 65 consecutive meets. Round after round putting in leaps that surpassed those of Powell. Constant defeats, however, were unable to bring Powell down. To make things serious, Powell brought himself to Lewis’ attention by winning the silver medal at the 1988 Olympics. The rivalry continued as Powell endured loses in hopes to defeat Lewis one day.Conquering Lewis became an obsession for Mike. “Beating Carl was the ultimate ambition. An obsession of sorts. He was the best all-around athlete of all time and was the benchmark that I had to achieve and be better,” said Powell.Powell’s resilience in the face of these hardships brought him face to face once again with Carl in Tokyo at the World Championships in 1991. What the world witnessed next was nothing short of a miracle......Powell sprinted ferociously toward the board to make his first jump; this was it. A leap of faith intertwined with hard work. He stretched at the last second just behind the line and ended with a poor first attempt. He immediately knew it. He got up from the pit ireful and clapped his hands together. There was no place for faltered attempts. 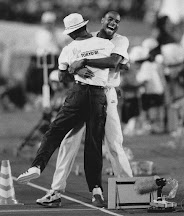 Carl, the man who defined the long jump, then took his place at the starting line, looking as calm and focused as ever. He had only lost one competition in the previous three World Championships. A gold medallist: Lewis set a World Championship record with his first jump, a mark bested by only three others besides him. He jumped a staggering 8.68 m. Powell was up against the God of the long jump.
After a terribly disappointing attempt, Mike was up on the runway again. With a lot of room to make up on Lewis, a good jump was not going to cut it. Instead, he needed a wind aided perfect jump. After minor adjustments from the previous attempt, Powell jumped 8.54 m in the second round, just 14 cm behind Lewis, and claimed second place showing Lewis that he meant business.
Lewis ended up responding with a foul on the course to surpass Powell’s attempts in the second round. Just as he sprung his legs up, the crowd saw the red flag going up. He had stepped over the line. Lewis at this stage jumped over  8.68 m, regrettably wishing he hadn’t fouled. Mike, in the third round raced down the path, utilised his hamstrings and thighs to the best of his abilities and launched himself into the air. Straightaway after landing into the pit, he realised he could have done better. He was far from the  8.54 m mark, and was only able to jump 8.29 m. Dissatisfied with his attempts, he looked up to the stands to find his coach Randy Huntington, trying to figure out how much to move his step forwards or backwards in hopes of a better jump next time.
Lewis understood that in a competition this serious there was no room for slip-ups. So, to rectify the miscalculation from the previous effort, he made sure to look down at the board just before he flew into the air and covered an unbelievable 8.83 m. This wind aided leap, slightly over the allowable, by Carl was enough to win all long jump competitions. 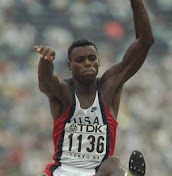 Entering the fourth round, Mike knew it was going to take a lot more to take Lewis down. Swinging his fingers in the air, he relaxed his body and mind. Carl watched intently as Mike made a run for it. Reaching the footboard and jumping into the pit, Powell could not believe it. Raising his fists high in the sky – a sign of triumph – he had jumped 8.80 m. This brief moment of joy was ruined as Powell saw the red flag go up. He screamed and argued to no avail. He fell to his knees and cried out. This showed how incredulous all this was for him. But Mike still managed to root out positivity from this situation. He was just 0,6 cm ahead of the foul mark. He was where he needed to be. He could do it.
As he prepared for the next round, Lewis got ready to destroy Powell once and for all. He dashed down the pathway, took a little peak at the footboard, and left everyone in awe with his long jump. A 2.9 meters per second wind aided jump of a whopping 8.91 m. Lewis was in shock. He had broken the world record by 0.01m that stood for 23 years. The calm on Lewis’ face was replaced with expressions of excitement. A sense of achievement. He felt conceited. The jump, however, could not be considered a new world record as the force of wind facilitated Carl but it was still allowed valid for the World Championships. Astonished at his own capabilities, Lewis returned to the benches knowing he had crushed Powell.
Gnashing his teeth, Powell took deep breaths. He closed his eyes and heard the crowd chant. 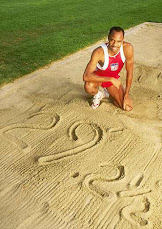 Losing was not an option. Without further ado, he set off for what would be known as the greatest moment in the history of long jump competitions. With room to spare on the footboard, he soared into the sky as if his arms had been replaced with wings and landed, covering a distance of 8.95 m, into the pit. He knew it was a long jump. But was it enough to dethrone Lewis? Both contenders waited eagerly for the results, when suddenly it was announced that Powell had jumped an astounding 8.95m. He had set the world record. Bob Beamon did not hold the place at the top of the table anymore. Lewis’ face went expressionless as if all his feelings of excitement and achievement floated away. The whole stadium was flooded with heroic chants from the crowd. Powell, possessed with the powers of a deity, had made history. With this jump it all fell into place for Powell. This was sufficient enough for Powell to keep the corrupting influence of constant defeats at bay. He ran loops across the track in excitement. Roaring to the crowd and celebrating with his peers. The audience felt lucky to have witnessed such an event.
Lewis was not chasing Bob anymore but instead it was Powell. He was known to respond and surpass his competitors under pressure. He still had two jumps left. In the fifth round, Carl Lewis jumped 8.87m and set a personal best, but it wasn’t enough to match the 8.95m set by his rival. It was now time for the final round. Powell on the starting line, ready to jump high. But to his demise, he ended with another long foul. A subdued reaction this time, knowing he already had the world record in his arsenal.

Following this wasted attempt by Powell, Lewis began his run with sheer concentration in hopes to continue his winning streak. A commendable effort this time, but it was still not enough to reach the heights that Mike had already achieved. A final jump of 8.84m by Lewis concluded the competition in favour of Mike Powell. By refusing to succumb to his circumstances of consistent defeats Powell was finally able to end the long winning streak of 15 – 0.

Lewis' reaction to the greatest competitions ever in the sport was to acknowledge Powell’s achievement. 'He just did it,' Lewis said of Powell's leap to immortality. 'It was that CLOSE, AND it was the best of his life.'

It was the indispensable need TO overcome Lewis that brought OUT the best of Powell. “I knew IN my heart Carl Lewis wasn’t invincible AND I had TO prove it TO the world. I don’t remember what I was saying TO myself, but I DO remember saying Carl isn’t safe yet. I couldn’t let him win again AND make it 16 IN a row. FOR my confidence AND my esteem AS an athlete, I had TO beat him. CALL it vanity, CALL it ego, it had TO happen.”

A perfect sprint WITH the world watching, most importantly Lewis. Powell “smelt roses AND blew candles” AS he neared the board AND jumped TO infinity. “The moment I was IN the air, I realised it was big. How big I had NO idea, but ON landing I was fairly confident I was CLOSE,” remembers Powell.

Lewis, the man who was supposed TO break Beamon’s record, retired without quenching his thirst of setting a NEW world record. Nonetheless, the LAST three jumps made BY BOTH contenders still stand AS world records AT low altitude TO this day. They are still considered the best of athletes of ALL time. Mike Powell AND Carl Lewis – ONE of the most incredible rivalries the world has ever seen.