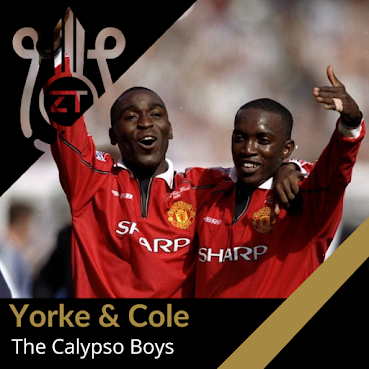 The couple of Andy Cole and Dwight Yorke during their time together at Manchester was absolute magic. Under the guidance of Sir Alex Ferguson, the pair gave Manchester United what many would argue is its most iconic season, 1998-1999. They gave football highs to both Manchester United fans and to neutral football lovers. The mutual symbiosis with which they played is now stuff of legend in football.

The duo of Cole and Yorke has been called the ‘Calypso Boys’ and ‘Soul Brothers’ because of the similarities in their origins and also because of the bond which they shared on and off the pitch. Both of them were born in 1971 with about 18 days between them, Cole on October 15 and Yorke on November 3. Yorke was born in Canaan, on the island of Tobago, while Cole was born in Nottingham to parents who had emigrated from Jamaica.

The meeting of these two players was not something that was carefully planned or thought about by  Ferguson. It was more like an accident gone right. After the failure of Ferguson’s pursuits to get Patrick Kluivert and Gabriel Batistuta to Manchester, he settled for Yorke, who was ready to move onto something bigger after his good seasons with Aston Villa. In August 1998, Yorke was signed by Manchester for £12.6 million. Many expected this would mean less play for Cole and probably lead to Cole’s sale, and there have been reports suggesting this was already in the process. Cole in the previous season had not had a bad run, scoring 25 goals in 45 games and some critics were not ready to see him go.

Cole was nonetheless ready for whatever was going to happen at the end of the season. Even before Yorke’s signing, he already had competition from Ole Gunnar Solksjaer and in particular, Teddy Sheringham, who he didn’t get along with. He felt he had played a good number of games for the club and
was ready to take things as they came. Cole was willing to show Yorke around Manchester and help him with house hunting. This isn’t what one would expect from a person who fears that he is going to be displaced.  Yorke also later revealed in interviews that Cole invited him to his home and that he had dinner with Cole’s family, which helped him emotionally when he was still new to Manchester.

It seemed by chance that Ferguson decided to start Yorke and Cole together during a match against Southampton in October 1998. This was really not his first or preferred idea, but for some reason, probably because his preferred players were not very fit on the day, he started Cole and Yorke that day. In the 11th minute of the match, Yorke scored the opening goal with an assist from Cole and everything else flowed from there. Both players scored goals during the game leading Manchester to a 3-0 win. They would then go on to become the most feared duo in European football for two seasons.

In November 1998, during a particular game against Barcelona in the group stage of the Champions League, the seamlessness of their play was accentuated when Cole scored a goal that Yorke claimed the assist for. Yorke also scored twice in the match and got assists from Cole. It was an important game for Manchester as they needed the points to qualify for the next round and Cole’s goal gave them that.

A pass from Roy Keane in the midfield to Cole led to an impressive dummy which allowed the ball to roll to Yorke. Yorke then returned the ball to Cole, who nicely slotted it into the net. There were many more moments of fantastic play between the two. One of those is the build-up to the goal scored by Cole against Brondby. Cole in a stepover and a pass sent the ball to Yorke, Yorke then fired a through-ball which went back to Cole, who then sent the ball over the goalie and into the goalpost. There was also that beautiful goal against Juventus in which Yorke in a swift header, sent the ball into the net after a cross from Cole. What a header it was. It is still one of those goals you want to watch to remind yourself of how brilliant things were that season.

The men rode on a wave of telepathy. It was like there was a feedback loop between them that others couldn’t interrupt. There was no need for shouts and obvious signals. You would have imagined that they had played many seasons together if you saw them play. When one sent the ball, the other was there to receive. It was like the presence of one brought out of the other what was needed at a particular time. The quick-thinking between the two was ingenious. There was no big man or small man in this partnership, they were both supportive of each other in play. They knew how to adjust their play depending on who they were facing. It didn’t really matter to them which of them scored. It was romantic football and it was beautiful to watch.

Individually, they were pretty amazing as well. They both had pace, skill and stamina.

When not linking together, they were still drilling shots and headers towards the goal as well as long and medium-range passes to and from their other teammates. Despite their similarities, they both still had their own distinguishable characters and styles. While it would have been more expected of Yorke to showboat and celebrate voraciously after placing in a stylish goal or get more paparazzi press, Cole was more likely
to be understated in his play and behaviour off the pitch.

After finishing the previous season without any titles, Manchester won the treble of the English Premier League, FA Cup and UEFA Champions League in the 1998-99 season after their signing of Yorke and the duo’s partnership had formed. This made Manchester the first English club to achieve the feat. For this season, there were 53 goals between them, with Cole claiming 24 and Yorke 29. This solidified their place in Manchester United history and in the hearts of fans. In this same season, Yorke won the Premier League Player of the Season award and also the Golden Boot.

In the 1999-2000 season, the duo was still deadly and they helped Manchester retain the Premier League title. Between them were 45 goals, 23 for Yorke and 22 for Cole. Like all good things which eventually come to an end, their influence gradually reduced over the next two seasons. They still amassed a total of 25 goals in the 2000-01 season even though Ferguson’s preferred attacking duo were now Teddy Sheringham and Ole Gunnar Solksjaer. Manchester once again won the Premier League title. Cole left Manchester United in the midst of the 2001-02 season in December for Blackburn Rovers, while Yorke left the club at the end of the same season. In July 2002, Yorke reunited with Cole at Blackburn after leaving Manchester. Despite the move, there was still some magic left in them. At their new club, they were able to win qualification for the UEFA Cup after Rovers finished sixth in the Premier League.

In his time with Blackburn, Cole was able to amass 37 goals in 100 appearances while Yorke scored 19 goals in 74 appearances for the club.

They both moved on from Blackburn in 2004 with Yorke going to Birmingham and Cole returning to Fulham. They also played for other clubs before later reuniting once more. In 2007 at Sunderland, under the management of their old Manchester United teammate, Roy Keane, they went on to play together again. By this time, they were clearly no longer at their peaks, and the magic had reduced. Cole went on to retire towards the end of 2008 and Yorke followed the following year.

One wonders how these two would fare in today’s football. In an episode of the United podcast, Cole revealed that he and Yorke still regularly have conversations about how they would make light work of going through today’s opposition defences and probably rack up to 40 goals. There is always a difference between being on the pitch and analysing the football from a studio or the comfort of our own sofas, so we will never really know what the outcome will be if Cole and Yorke’s playstyle was full swing in today’s football. In an interview with MNF Retro, Jamie Carragher said that defending against Cole when he used to play for Liverpool was not an easy task, especially as Yorke would be in front of him when Cole was trying to run in behind him.

Before their partnership was broken up, the duo of Cole and Yorke at Manchester United was very effective. Their combined force terrified many defenders, excited many fans, and also brought the silverware for their club. They really were brilliant strikers in their prime. Their discernment of play and of one another remains a coach’s dream. They played magical football, which has left a lasting impression in football lovers’ hearts.