Historically Australia is a country that performs very well in the Summer Olympics, always earning many medals; but if we talk about the winter Olympics, things are diametrically different.

But Australia, despite never having had great champions in winter disciplines, will always be remembered for being the birthplace of Steven Bradbury, the most incredible winter Olympic gold medal ever.

All sports fans have at least once seen the videos of his victory; his story went around the world snatching a smile from anyone who looked at the images.

The life of Steven Bradbury for most is summed up in that lucky victory, but that unexpected victory was probably the reward of karma for never giving up in the face of difficulty and always standing up with a smile.

So who was Steve Bradbury?

He was an excellent ice skater who defended the Australian colours in 4 World Championships and 4 Olympics.

This victory foreshadowed a very bright future, but the first disappointments soon arrived. The following year, there was his first Olympic participation (Albertville’ 92). He, with his teammates, was the reigning world champions, so obviously they were the favourites in the predictions. A disastrous fall in seminal, however, prevents him and his teammates from reaching the final. The Olympic expedition of Australian skaters was therefore a failure.

In the following world championships (Beijing ’93 and Guildford’ 94), he managed to win a bronze and a silver medal, always with the 5000m relay team; but the forbidden dream was the Olympics.

At Lillehammer ’94, being in the team, Bradbury and others brought Australia its first medal in the Winter Olympics history, a bronze medal.

This year, Bradbury was selected as a medal contender for events like 500 meters and 1000 meters, but he was interested in the latter, because he was the favourite.
Qualifying for the event’s quarterfinals was going well for him as he ended up at the top of the tables.
But in the semi-finals of the 500 meters event, he was knocked out by one of the opponents and went home in the fourth position. In the 1000 meters event, he was pushed illegally by another player who was later disqualified. All these accidents can make anyone drop their dreams, but Bradbury was determined, so he entered the 1994 World Cup event in Montreal. The chain of bad luck had just begun; something unexpected happened at this event. His thigh was sliced by a skater’s blade causing him to lose around 4 litres of his blood. At the end of the track, his heartbeat was 200 per minute. Bradbury thought that if he got unconscious then he would be dead that second. His thigh got around 100 stitches and he was not able to move for weeks.
Three of the quartet of the medal-winning team for Australia, including Bradbury, entered the Japan ’98 Olympic in the hope of repeating their previous performance.
But there was something with Bradbury and accidents. That year also proved to be tragic for him. Again there were collisions at the track making him lose. Despite losing the game, Bradbury was not stupid enough to give up on what he achieved through his hard work. Working on his game as well as his confidence for the skate track, he once again competed, in the World Cup in Nagano. But all he got there was again an accident. This accident was not like the previous one, rather it was more hurtful and cost him his life.
During a training event, a skater fell in front of him and tried to jump on him, but as he did so, he hooked the skater and stumbled his head into the barriers. Spending a month and a half in the halo, he fractured his vertebrae.

His head was supported by four pins. Plates and screws also supported the back and chest. Doctors told Bradbury that he was unable to continue his sport further. It took him months and months of practice to regain his lost spirit and confidence in racing. Knowing he was very young to give up on his dreams, he did everything to be able to continue skating and even managed to qualify again for the Olympics. He wanted redemption after all the accidents that happened in 1994 and 1998. He certainly hadn’t gone there with the confidence to win because he was still recovering from injuries.
Bradbury therefore participates in the 2002 Olympics with the intention of retiring after the event. They say that when you are not under pressure you behave well. It was the same case with Bradbury in previous editions, but for him, this time it was different: he was free from thoughts, he just wanted to participate and have fun. He knew he had no chance of winning. But
he didn’t know that this would be the time when his hard work from all his previous years would pay off in a way he had only dreamed of. That year, he took part in two short track events, 1500 meters and 1000 meters. Due to an unfortunate incident, he was out of 1500 meters in the second round.
It felt like the script was repeating itself once again. As they say, where there is a will there is a way. Bradbury was unaffected by the loss of his previous event and took to the rink to skate the 1000m more determined than ever. There was little or no hope that Bradbury would qualify for the final, let alone snatch gold from the then top players, Apolo Ohno and Marc Gagnon.
Bradbury played well in his heat and secured a place in the quarterfinals. But this was no different than another time where luck was not on his side.
Bradbury was grouped with these two along with the other players. Ohno was the best player from the hosting nation and Gagnon was the defending champion. 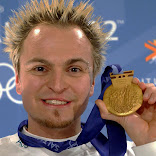 The skate rules were simple as the top two winners from both races would be qualified for the semi-finals.
He ended his heat convincingly, but he secured only the third position in the quarterfinals. All set to go back home, Bradbury never thought about the disqualification of Gagnon for impeding another racer. This was quite shocking for Bradbury as well as his coach Ann Zhang. Something was changing, Bradbury for the first time in a long time, had a lucky episode in his favour.
Being the second oldest player, it was evident that he couldn’t match the speed of his opponents. But Bradbury has shown that sometimes clever tactics and plans can make you a winner even though others are better than you. Strength does matter, yes, but what’s more important is how you should use it.
The plan, Bradbury thought, was simple. He wanted to navigate behind the opponents hoping that their enthusiasm would lead them to eliminate each other through collisions. It was a desperate plan, but it was the only one he could put into action. It would be useless to try to fight in the first lines. Knowing your weaknesses and using them as a strength was what Bradbury chose in that game. He knew very well that he could not match the speed of his rivals.
With him on the track, the other riders were the reigning champion, Kim Dong Sung, the medalists Li Jiajun and Mathieu Turcotte.
His mad plan worked, three rivals crashed, and he comfortably got a place in the final.
Going with his same tactic, in the final, Bradbury was again following the rivals from behind instead of challenging them: a collision can lead to the fall of two or more skaters, which means that the remaining three will get the medal.
Bradbury spends practically the whole race behind his four opponents, he can’t compete with them; they are too fast for him.

At 50 meters from the finish line, the unbelievable happened: one after the other his opponents fell to the ground and he crossed the line in disbelief as the winner! Bradbury won Olympic gold! Bradbury won Australia’s first-ever gold medal at the Winter Olympics, a historic achievement that becomes even more legendary in the way it was achieved.

After his winning at track, in his interview, Bradbury said:

“I knew I was not the fastest skater out on the tracks. It took me several moments to realize that I’d won. But I’d rather say I’ll take it as a reward for my hard work for the past ten years.” Speaking about his strategy, he also said that he considered it was good for nothing to step up and fight for four racers with people faster than you. He figured out that it was better to stay away and come last. But his devotion to his sport decided not to fail him in his last most important tournament.

After his success, he was praised and loved by all of his fellow countrymen. The media supported him and made captions for him like the value of the underdog never giving up regardless of the odd actions.

Success will never come by itself; you have to achieve it with your hard work. Sometimes it requires sacrifices, and other times it gives pain, as in the case of Steven Bradbury. But self-confidence can make you do anything. Bradbury turned the garden behind his house into a skating rink so he could practice. He decided not to stop even though he was told he could no longer skate or when he thought he would die. He had only passion, devotion and dedication to skating and in the end it paid off unforgettably.

Rumble in the Jungle: Muhammad Ali October 30th, 1974, is an extremely important date for boxing fans all over the world. This date marks the historic sports event 'Rumble in the Jungle' between two excellent and outstanding boxers in history, namely George Foreman and Muhammad Ali. This day crafted the future careers for both opponents and was a crucial pivoting point of their lives. It was held at the 20th of May stadium. The audience was humongous, and the crowd of almost sixty thousand spectators added to the excitement and anticipation around one of the world's biggest and most grand boxing events.  The event took place in the previously known Kinshasa, Zaire (modern-day Democratic Republic of Congo). Fans remember it as the most exhilarating and hyped sports event of the entire century. Not only was there a massive audience watching the two iconic athletes compete, but the show was also broadcasted on live television, giving it access to an unimaginable number of view
Read more