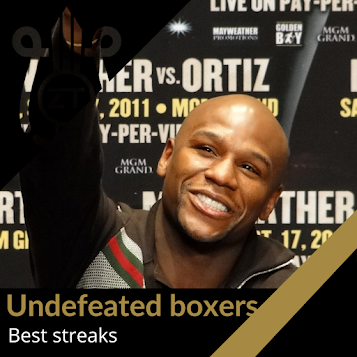 Many boxers reach the world championships and fail to maintain their good run. Only a few manage to break the record and retire undefeated. Below is a list of the greatest undefeated boxers of all time.

Although Valero had a tragic end in his boxing career, he had first-round knockouts and fearsome combinations in the ring. "El Terminator" retired with 27 wins and 27 knockouts, an untouchable record.

A boxing legend, Ricardo Lopez was undefeated as a professional and as an amateur. He dominated strawweight and flyweight divisions during his career. And although Ricardo has one draw on his profile, he is a Hall of Famer and a world champion in two weight classes.

Joe Calzaghe is not so famous but arguably the best British fighter to ever step the ring. He was a super-middleweight and light-heavyweight unified champion during his 15-year career. Calzaghe still holds the record for the longest-serving WBO super-middleweight champion for more than ten years.

Unbelievable as it may sound, Rocky, accomplished all this greatness in 9 years- something no boxer will ever do. He had an astonishing 85.7% knockout-to-win ratio in world heavyweight fights, the most impressive stats in the boxing world. He is also one of the pioneers who took the sport into the mainstream.

Although controversies surround his career, we cannot dispute Mayweathers determination to be the greatest boxer of all time. He holds a record of 50-0 and does not seem to stop any time soon.