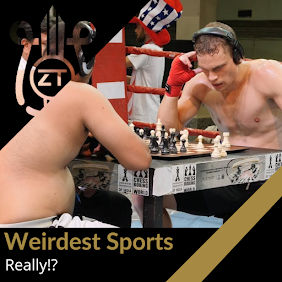 Here is a list of the strangest sports you have probably never heard of. Some date back as early as early man. I am sure you would want to try a few of them.

The sport consists of 11 rounds of knocking out and checkmating opponents. Competitors switch between boxing and playing traditional chess.

You can witness the madness in egg-throwing during the annual World Egg Throwing Championship in Swaton, England.

The game involves two opposing teams trying to push a puck using a stick across the floor of a swimming pool to score goals. The first worldwide underwater hockey championship took place in 1980.

Toe wrestling involves participants going toe-to-toe. Rules are straightforward: without socks and shoes on, two competitors interlock their toes and try to “pin” down their opponent’s foot. Toe wrestling started in 1976 when the British wanted to gain a world sports title.

Humans and canines freestyle together while incorporating tricks like dancing and obedience training. The sport requires the highest form of teamwork. Although Musical Canine Freestyle is new, competitions take place worldwide.